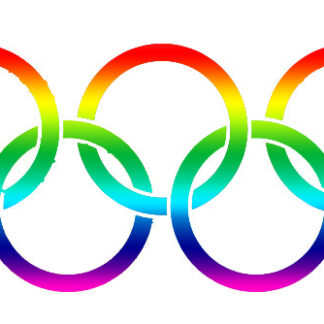 You GUYS! It’s the Olympics!! TOMORROW!!

Now. Historically speaking, I’ve been very excited about the bi-annual inspiration-fest that is the Olympics. The one and only primetime sporting event that has a higher proportion of women viewers! Athletes catapulted by a breathless media from complete obscurity to household names in an evening! Two-man luge!! I have always been drawn to the unique struggle represented by the Games. Everyday people reach their peak after years of devotion to their chosen sport; some dreams must die while others will triumph. The drama plays out with heart warming backstory interviews on primetime. We come to see a little bit of ourselves in every Olympian.

This year, however, my typical enthusiasm has waned a tad. Terrorist bombings. Abhorrent anti-gay politics. A podunk host city. Sports journalists complaining about hotel hell (HELL, I tell you!!). All told, there’s very little about the Sochi games that enchants me. Furthermore, the cigarette embers are still glowing from the Big Corporate Marketing Collective Orgasm that is the Superbowl, and I’m just not sure I’m ready for any more heartwarming Coca-Cola ads so soon after the last ones.

Nevertheless, I feel compelled to search for the essence, the meaning, and the beauty of the Olympic Games. To give us a reason as athletes to tune in, fire up, and get behind something. No matter the sport, when you train hard all year and often find yourself doubting your sacrifices, the Olympics seem to come along at just the right time to stoke your ambition and make you remember why you ever started. In short, don’t hate the players, hate the game. Now let’s find us some inspirational athletes!

“The placing is not important if I can teach young people in Nepal about the Olympic spirit. This spirit is in my heart.” Thus spoke Dachhiri Sherpa, a 44-year-old Nepali cross country skier who has finished in 94th and 92nd place, respectively, in the last two Olympics’ 15km men’s cross country ski events, according to BBC Sports. Doing it for the kids? You’ve got my vote Dachhiri. I’ll be watching and cheering, hoping to see you crack 90th spot this year.

Flashback inspiration: 2010 Olympics in Vancouver. Say what you will about figure skating as an official sport (I’ll say this: it certainly sells tickets), there couldn’t have been a dry eye in the house when Canadian skater Joannie Rochette climbed onto the bronze medal podium. With immense courage and determination, she performed at her very best despite her mother’s sudden death 3 days before her competition began. Not to advocate that we should put sport before family, but this woman did what she needed to do to honour her mother, and it moved us.

Did you know that the German women’s bobsledders are sponsored by Playboy? I say bring it. Ain’t much scratch in bobsledding, and a girl has to get paid. And as a side benefit, why not promote a healthy, muscular body type in mainstream smut? (Especially when your sport involves hurling yourself down a slick tube in a phallus-shaped vehicle… ok, I went there…)

Historic Inspiration! In 1960, Ethiopian Abebe Bikila became the first black African gold medalist when he ran the marathon barefoot in Rome. Take that, former occupier and colonial power host country! (True, that’s not a winter sport, but it’s Black History Month and I’m keeping it in!)

The nation of Tonga fields its first ever winter Olympian this year, in the form of luger Bruno Banani. Although he failed to qualify for Vancouver 2010, his persistence, and willingness to legally change his name to that of a German underwear brand for sponsorship dollars (Yes, Bruno Banani is also a maker of German gonch), have paid off. Banani is a full-fledged qualifier for the Sochi 2014 games. Take that, Jamaican Bobsled team!

WOMEN’S SKI JUMPING!! In 2005 the International Ski Federation’s president and others cited the likelihood that women’s reproductive organs could be damaged by the impact of ski-jumping as a reason to exclude them from Olympic competition. The women again bid to be included as an official sport in the Vancouver 2010 games, and were denied. Finally! In the least gender- and sexuality-inclusive games yet, at least the lady ski-jumpers get to knock their uteri around for a medal! I will most definitely be tuning in to see the first ever medal ceremony for women’s ski jumping. A small victory for female athletes, and a massive triumph for the three who will grace the podium.

A thousand and one more inspirational athletes’ stories remain to be told this Olympics. We’ll only know their names when they bubble to the top — their sacrifices, hardships, and grit exposed. May we all come to know and be inspired by the finishers, and not just the medallists.

And with that, my heart sufficiently warmed, I’m off to knock back 17 Coca-Colas.

Feeling inspired? Check out Pump Up Your Jam and RDA:CoreBuilder and take your own game to the next level.