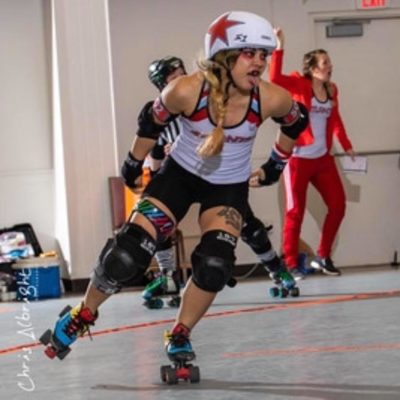 Johnnie (aka Brooke H.) has been in the roller derby scene since 2010. She started out as a primary All-Star skater for the Derby City Roller Girls in Louisville, Kentucky. In DCRG, she helped out a lot with getting new skaters comfortable on their feet, and even served on the training committee. It was during this time that her interest in fitness and park skating spiked, and her journey to improve herself physically began.

In 2017 she moved to Atlanta, Georgia and transferred to Atlanta Roller Derby. She has spent time on two home teams–the Glamma Rays and the Apocalypstix–and as a Dirty South Derby skater. Within the league, she has helped lead home team practices, contributed to new skater training, and acted as a co-captain for the Apocalypstix.

Johnnie is also an avid park/ramp/bowl skater. As a former member of the CIB Louisville chapter, she has since joined the CIB Atlanta chapter and helps the group as an admin. No trick too scary to at least try once!

In 2018 she received her official NASM certification as a personal trainer. Some of her specialties include small group training and youth exercise. She spends her time in Atlanta as a full time fitness coach and small group circuit training instructor.

In her very busy schedule, when she’s not working her day job at the gym, she does freelance illustration and design (which is somewhat both work and a hobby). She likes collecting plants, watching British comedies, and riding little Power Wheels cars around the neighborhood with her partner.

Want to get training with Johnnie to reach your goals on the track? Check out our training plans…