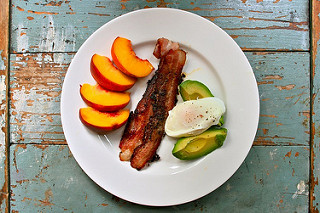 What is the Paleo Diet?

Supporters claim that paleo is the healthiest way to and is “the ONLY nutritional approach that works with your genetics to help you stay lean, strong and energetic!”. – Robb Wolf

“Paleo” implies “Paleolithic”, going back to the closest approximation of humanity’s ancestral diets. You’ll also hear this diet referred to as “Primal”.

The paleo diet posits that humans are genetically better adapted to eating whole unprocessed foods. This means that eating paleo means eating tons of vegetables and lean (grass-fed) proteins , fruits, seafood, nuts and seeds, as well as healthy fats.  What you don’t get to eat is most processed food – dairy, grains, legumes, starches, alcohol, and refined sugars.

That doesn’t sound so bad!  Whole and minimally processed foods ARE better for you. Lean proteins, veggies and fruit and healthy fats should be the cornerstones of a healthy diet.

What does the Paleo Diet claim? Paleo claims to give you improved energy and strength, better sleep, clearer skin, and general improvements in your health.  Also, since you must be far more aware of where the food that you’re eating comes from, you tend to purchase smaller-scale more sustainable produce and protein.  Mostly, paleo claims to be the best choice by highlighting the downfalls of the common North American diet.  There is pretty solid research that a processed, trans fat and sugar laden diet can be a strong contributor to such diseases as;  obesity, cancer, diabetes, heart disease, Parkinson’s, Alzheimer’s, depression and infertility.

Are there any studies to back up those claims?

In fact, some.  Many have been conducted by Prof. Loren Cordain, who is sort of paleo’s resident researcher.  There are a few other reputable peer-reviewed studies whose results support that the paleo diet isn’t totally off the mark.  Multiple studies have found that when eating paleo, participants spontaneously restricted calories, ate far fewer carbs and much more protein.  Unfortunately, the studies so far are mostly small-scale (9-29 participants) and sort-term (2-12 weeks), so more long-term and far-reaching studies need to be conducted to see if the improvements are repeatable and statistically significant.

To get a better idea of how being Paleo fits into the derby lifestyle, let’s talk to someone who lives it  – Toronto Roller Derby’s Commander Will Wrecker.

What’s paleo, in a nutshell, to you?

The paleo diet follows the idea that for optimal health, modern humans should return to eating real, whole unprocessed foods. The reasoning behind paleo is that humans have biologically adapted to whole foods such as plants, meat, and seafood. In a nutshell: Eat all the fruits, vegetables, lean meats, seafood, nuts and seeds, and healthy fats as you want. Avoid all the dairy, grains, processed foods and sugars, legumes, starches, and alcohol.

How long have you been paleo?

I have been almost “paleo perfect” for about 5 years now.

Up until trying paleo, I really struggled with finding and maintaining a balanced way to eat. I love to eat, and would never exercise portion control; I would decide to eat “healthy” for a few weeks, and then eat terribly the weeks following.  Paleo sounded like a really easy way for me to finally get my eating figured out. What paleo actually turned out to be for me was an education in all things nutrition.

I follow paleo for three big reasons: One: because I am still learning every day. There are always new recipes to try out, new ingredients to use, and new information being published that I can use to educate myself about how I am fuelling my body as an athlete. Two: because I feel completely free. I never worry about what I am eating, how much I am eating, or when I am eating. I don’t feel guilty about having seconds, or eating right before bed, or any of the worries that I used to have pre-paleo. I know that my meals are balanced, and that the food that I am eating is nourishing and is beneficial to my body. Three: athletic performance. I feel FANTASTIC at the gym and at practice when I am eating paleo. I remember a few weeks after I started eating paleo I stopped feeling tired near the end of practice and I could exert more energy at the gym. This was the real life proof I had that I was finally feeding my body to perform at a higher level. I’m a paleo lifer.

What is the most challenging aspect of eating paleo?

I miss grains like whoa. I miss diary like whoa. Seriously, there is NO substitute for a giant bowl of pasta covered in cheese. I briefly mentioned earlier that I am almost “paleo perfect”: I still use milk in my coffee (I’ve tried every substitute and I can’t stomach any of them) I will once in a while have a piece of toast at breakfast, and I will nibble some cheese here and there… but that’s pretty much it.

What is the greatest benefit of eating paleo?

For me, I think the benefits can be categorized as both mental and physical: I feel mentally “at ease”: I know that what I am eating is nourishing my body. I feel physically strong: After starting paleo, my energy levels at practice and at the gym skyrocketed. I could skate or lift faster, harder, and for longer. My strength and endurance both noticeably increased. Day to day, my energy levels are balanced, I no longer feel sluggish or bloated… and I poop regularly! Woo!

What do you eat on game day?

Game day is a big day for food. I will have a 2 whole egg, 4 egg white, and cup of chopped spinach omelette and some bacon. If I am eating on the first day of a tournament or playing in a double-header, I will probably have toast or sweet potato. Oh, and a big cup of coffee. A few hours later, I will have a protein shake. Leading up to the game I will have half a sweet potato, a chicken breast and about 2 cups of vegetables. At halftime, I will eat an apple or a banana. After the game, I usually like to treat myself to chicken tenders and sweet potato fries. I know the breading on the tenders is a cheat, but hey! I deserved it!

Stay tuned for Part 2, where NoFair will share her experiences with eating paleo, and we’ll share some tasty paleo recipes!