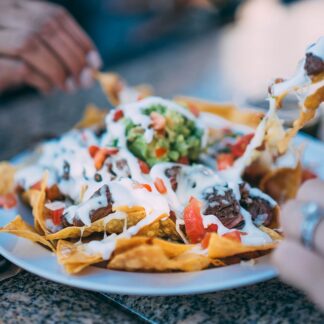 Another Playoff season is upon us!  Who is having a watch party?  And at that watch party, what are you serving?  I’m back with some healthy munchies that will make you the hit of the season!

The theme for all of these tasty treats is replacing your grains with a green, let’s take those carb-heavy noms and make them just a little greener!

Do you love loaded potato skins?  Me too.  But do you know what else I love? Vegetables!!  Let’s combine them for a sweet and yummy app that’s perfect for watching some sports!

Instructions: Preheat over to 400°.  Fry bacon until crispy, then transfer to a plate lined with paper towel.  Crumble when dry.  Cut zucchinis in half lengthwise, then scoop out the seeds.  Cut each half into about 4 pieces and tansfer to a non-stick baking sheet.  Drizzle the zucchini with EVOO, then sprinkle the chili powder, cumin, salt and pepper on top.  Bake for about 5 minutes or until just tender.  Top the zucchini with bacon and cheese and bake for another 10 minutes or so.  When ready to serve, garnish with sour cream or Greek yogurt and green onions.

Not feeling potato skins?  Well, how about some pizza?

Instructions: Preheat the oven or toaster oven to 425 degrees F. Brush both sides of the eggplant with EVOO and season with the salt and pepper. Place the eggplant on a baking sheet and bake until browned (about 6 to 8 minutes, turning once). Top each eggplant slice with pizza sauce, cheese and veggies.  Bake until the cheese melts, 3 to 5 minutes. DEVOUR.

Instructions: Preheat oven to 425° and line two small baking sheets with foil.  Split up the peppers, zucchini and carrots onto the two baking sheets.  Toss with EVOO and spices, then make sure that the veggies are cut-side up in a single layer on the sheets.  Bake until the veggies are tender and starting to crisp (usually about 6-10 minutes, depending on your oven).  Remove from oven and top one sheets with half the cheese, then add the rest of the veggies and the rest of the cheese.  Bake for another 6-10 minutes until the cheese is bubbly and starting to brown.  Serve with cubed avocado, salsa, pico de gallo, sour cream, etc.

And for those of you who don’t just want to melt cheese on veggies for your snacks, here are a couple of extra snacks that are lighter on the dairy, but heavy on flavour!

Instructions: Preheat oven to 450° . On a large baking tray, toss edamame with EVOO, salt, pepper and red pepper flakes. Bake for 10-15 minutes and serve with flaked sea salt (or more kosher salt) and lemon juice.  Make sure to have an extra bowl for the empty pea pods!

Instructions: Cut cucumbers into 3” pieces. Hollow out the centre of the cucumber using a spoon or melon baller.  In a separate bowl, combine tomatoes, olives, feta, dill, lemon juice, EVOO and oregano.  Stir until well mixed and top with salt and pepper.  Spoon the mixture into your hollowed out cucumber for salad that you can eat with your hands!

What are you looking forward to this Playoff season?  We’d love to know!

Leave us a comment below! We heard falafel was really popular in Malmö…

Category: Derby in the Kitchen