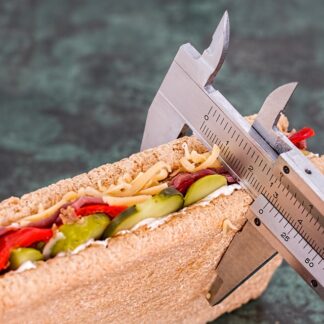 “You can’t manage what you don’t measure.”

With SO much information out there on various dietary strategies (like the ones we’ve been breaking down for you in our recent Derby in the Kitchen series), it can be really tough to know what to eat and when. That’s where tracking can be a big help.

Tracking your food intake can help you to see certain patterns, like “hey, on the days where I eat tons of dairy, my stomach is upset – maybe I should check out my lactose tolerance”.  It can also give you a decent benchmark on whether you’re eating enough, or too much, and if you’re consuming the right proportions of nutrients.

On the other hand, tracking can drive some people crazy.  If you are apt to get really hung up on the numbers or make unhealthy choices to hit the right numbers, you may want to approach tracking in a different way – like choosing a habit (eating veggies and/or lean protein with every meal) and track how successful you are with a simple check-mark system instead of logging every mouthful.

If you feel like food journalling might work for you, there are a ton of apps that help make it easier.  You’ll also want to invest in a food scale to ensure that your portion sizes are accurate.  myfitnesspal (MFP) is one of the more popular apps out there, and it does a pretty good job.

Speaking of people for whom tracking might not be a great fit – let’s hear from Booty, who took one for the team and journalled two weeks worth of meals for us to pick apart!  Thanks Booty! While myfitnesspal does a decent job, I find their macro calculations leave a little to be desired when it comes to eating for athletic performance and muscle gain. Specifically, their protein numbers tend to be really low.  For someone Booty’s build, hoping to maintain their weight, and perform athletically, I would make the following tweaks:

This would inject a little more protein, helping to build and repair muscle while still keeping the carb intake high enough to support performance.  It’s easy to change your macros in MFP.  You can just follow this handy guide.

As an analytical person who loves a good data-driven approach to a problem, food logging is right up my alley.

There’s no question that reviewing the data at the end of each day was pretty fun and rewarding! And I definitely learned a thing or two about the foods I eat and don’t eat.

…But… I kind of dreaded actually doing the logging. While MFP does make it as easy as possible to enter food (you can even snap a pic of the bar code on food packaging to grab the nutrition data in seconds), it was still a bore and a chore to sit down and pump in the 14 ingredients in my salad, or try to figure out how to account for the nachos shared with my (nacho-loving) team after a meeting!

#1. EVERYTHING is an approximation. From the four basic ‘activity level’ settings you have to choose from in MyFitnessPal (from Sedentary to Very Active), to the portion sizing you enter for each part of that indulgent restaurant meal you have no way of accurately estimating the butter content for…  you really need to take everything on there with a healthy grain of salt. (Unless MFP is telling you your sodium intake is too high, of course).

#2. Which brings me to… approximating the impact of exercise is even less reliable! If you’re a gadget person and have a monitor of some kind that seeks to track your actual output through a workout by tracking heart rate, that’s probably the best you can ask for. But asking Record (an app by Under Armour, who also own MFP, and the Map My Run/Walk/Ride app suite) to approximate my calorie burn from an hour of warmup, heavy lifts, physio exercises, and core training at the gym and be accurate? Nope. Not gonna happen. I just used my best guesses for all activities. I’d have to log a 3 hour derby practice (including warmup, gear up, water breaks, etc.) as 2 hours of hockey, for example. Can’t imagine why Record hasn’t got a “roller derby” workout option yet, but there you go…

#3. For someone who feels like they eat a pretty healthy diet, I eat a lot of fat!! See NoFair’s notes below for more scientific analysis, but at the end of each day my fat intake seemed so high as a percent of my total intake! Because it’s a relative measure not an absolute, I can see that I need to add relatively more carbs and protein each day to support my activity level.

#4. Logging my food definitely showed me that I could stand to eat more. Food doesn’t have as many calories in it as my mental picture thinks it does! I’ve never been a calorie counter, but my approximation gauge was definitely off. There was one day where I ended up uncharacteristically pigging out on Ben & Jerry’s with my partner, and I was still 50 calories under my daily goal! WHAT?! This wasn’t teaching me any positive lessons!

One last note before NoFair takes my diet to the mat for a beating… I did choose “sedentary” on the MFP profile settings based on their description of a work day. I’m definitely not doing manual labour all day, nor am I on my feet like a nurse or retail worker. Because I am entering my workouts as calorie expenditure, I figured it made sense to call the rest of my day sedentary.

So, what did I see in Booty’s journal?  First off – some trends:

Booty exercises a fair amount (#statingtheobvious), and so every day that she trains her caloric needs increase.  Often, with tracking apps we get the net caloric goal stuck in our heads and eat to that target.  That means we don’t end up eating enough food and we aren’t properly feeding the muscles we’re trying to build.  I would encourage Booty to enter her exercise into the app as soon as she does it, rather than later in the day, so that she has an accurate idea of how many calories to consume given what she’s already done.

I would also add a lean protein to, like, every single meal or snack she ever eats.  Breakfast and lunch were generally pretty good with eggs or Greek yogurt covering the morning protein, and some sort of salad with meat covering midday.  Dinner is where the protein fell behind, with some vegetarian choices not having additional protein sources added in.  Also, dinner was the meal that was generally least consistent – Booty seemed to have a good idea of what each day’s breakfast and lunch would be, and then some dinners seemed planned and some seemed like whatever was in the house.

Moving forward, I’d have Booty re-set her numbers, include some higher protein snacks through the day and make a weekly dinner plan so that she’s ready for anything.

Since I usually have practice three weeknights out of five, and weekends are not very routine, it’s no big surprise that my dinner is the least reliable. On practice nights I usually eat two small-ish dinners: an early one before leaving for practice; then a drawn out grazing during the car ride home, and when I get home at 11pm. Frustratingly, MFP is only set up for 3 meals plus “snacks,” and I wasn’t consistent about where I entered my two dinners – some were as a snack and some were as a dinner. This *might* have skewed NoFair’s review? Regardless, I could stand to nail down a short list of easy hand-held foods (edible while driving) for before and after practice.

It remains hard for me to imagine adding a few hundred extra calories to my days and still feeling healthy. Other than dark chocolate, I don’t have much of a sweet tooth, and eating sweet things (for additional carbs) can really aggravate my stomach. I can’t even tolerate bananas, and drinking fruit juice is hit and miss. So I definitely gravitate towards low-sugar savoury snacks. This doesn’t seem like a bad thing, health-wise! But I need to figure out some tricks for how to still get enough carbs without the sweets.

It seems like my natural starch-avoidance tendency might need to change in order to get more carbs in my face. Adding toast to breakfast, or a baked potato to dinner, is something I will try!

Stay tuned for our next post, where we look at some of the individual recipes that Booty made – what she did great, and what she can improve!